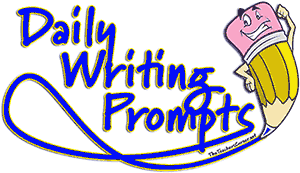 Below are daily writing prompts for the month of July. The majority of the prompts are related to the various events on our July Events Calendar. These events include birthdays, holidays, monthly celebrations, and important dates in history. Some of the dates include two different writing prompts to choose from. You can download a PDF form of the writing prompt.

Even though your students may not be in class all the days of July, use the prompts from those days as additional writing practice.

Don't forget to also print a copy of our July Events Calendar. This will help you utilize the daily writing prompts.

We also have many other July Activities, Lesson Plans and Resources.

COPYRIGHT NOTICE: The text below is protected by copyright. You may NOT republish any of the prompts below on any internet website. For more details, please read our Terms of Use.

All content and materials on The Teacher's Corner are protected by copyright. Please see our 'Terms of Use' for acceptable uses.

July
The first Monday of July is Caribbean Day.  This day celebrates the wonderful Caribbean culture.  Using resources in the classroom, learn five (5) facts about the Caribbean and summarize them in your own words.  PDF

July 1
July 1st is “International Joke Day.” Many people love to tell jokes.  Create several jokes of your own to share with the class.  You may also want to read a few different types of jokes to help you get started. PDF

July 2
On this day in 1900, the first Zeppelin flew.  This ship, named after Ferdinand von Zeppelin, was initially used as an experiment for regular airship travel.  While in existence, the ship flew more than 1 million miles with a perfect passenger safety record.    Would you like to travel in an airship like this?  Why or why not? PDF

July 3
July 3rd marks the beginning of the “Dog Days of Summer.”  These days are typically the hottest and most humid time of the year.  They get their name due to the fact these days occur when the “Dog Star” Sirius raises before the sun.  Explain your favorite “Dog Day” activity.  PDF

July 4
On July 4, 1776, the United States declared its independence from Great Britain.  Every year we celebrate this holiday with fireworks.  How do you think this tradition came to be?  PDF

On this day in 1872 our 30th President, John Calvin Coolidge was born. Using resources in the classroom, learn five (5) facts about Coolidge and summarize them in your own words.  PDF

July 5
On July 5, 1971, President Richard Nixon formally certified the 26th Amendment. This Amendment to the U.S. Constitution granted 18-year-olds the right to vote. Do you agree or disagree with this law? Should the age to vote be younger or older than 18 years? Explain the reasons for your argument. PDF

July 6
On July 6th the first picture postcard was made.  If you were asked to create a postcard to represent one of the following, what would you draw and why?

After writing about your postcard, create a sketch of what it would look like. PDF

July 7, 1930 marked the beginning of construction on the Hoover Dam, formerly known as the Boulder Dam. One goal of the dam was to capture water from the Colorado River to use for irrigation. What are some of the positives and negatives for building dams?  PDF

July 8
On this day in 1835, the Liberty Bell cracked while being rung at the funeral of John Marshall, an American statesman who helped make the Supreme Court a center of power.  Using resources in the classroom, learn five (5) facts about the Liberty Bell and summarize them in your own words.  PDF

July 8th is “Video Games Day.”  Do you enjoy playing video games?  Why or why not?  What is your favorite game?  And do you think that video games can help students?  PDF

July 9
July 9th is “National Sugar Cookie Day.”  Describe the sugar cookie you would like to make.  Be sure to include the shape, colors and decorations.  And don’t forget a sketch. PDF

July 11
On this day in 1899, author E.B. White was born.  White is the author of Charlotte’s Web.  As you may know, this book was recently made into a movie.  Do you think it’s better to read a book before seeing the movie?  Why or why not?   PDF

July 11th is “Cheer up the Lonely Day.”  When someone you know is feeing lonely or sad, what do you do to help them feel better?   PDF

On this day in 1767 our 6th President, John Quincy Adams was born. Using resources in the classroom, learn five (5) facts about Adams and summarize them in your own words.  PDF

July 12
Today is “Paper Bag Day.”  It marks the day that the paper bag manufacturing machine was patented.  If you were given a paper bag, what you put in the bag and why?    PDF

On this day in 1957, the United States Surgeon General, Leroy E. Burney, announced there was a direct link between tobacco smoking and lung cancer. Use various supplies in your classroom to create an advertisement warning people of the dangers of smoking. PDF

July 13
July 13th is “National French Fries Day.”  Some people enjoy topping their fries with ketchup or chili.  How do you eat your french fries? PDF

July 14
July is “National Picnic Month.”  If you could plan the ideal picnic for your family, what would it look like?  Be sure to include the following:

On this day in 1913 our 38th President, Gerald R. Ford was born. Using resources in the classroom, learn five (5) facts about Ford and summarize them in your own words.  PDF

July 15
On this day in 1954, the first Boeing 707 flew.  If you could design the inside of your own airplane, what would it look like?  After writing your description, be sure to include a sketch. PDF

July 17
On this day in 1955, Disneyland opened.  What is your favorite amusement park ride and/or activity? PDF

July 19
On July 19, 1916, Eve Merriam was born.  Merriam was a poet, playwright and teacher.  She began writing poetry when she was seven.  Think about your favorite form of poetry and write a poem.  If you have time, you can add an illustration to your poem. PDF

July 20
Today is “Moon Day” to mark our first landing on the moon.  There are many character traits an astronaut must possess.  What do you think is the most important trait for an astronaut?  Why did you select this trait? PDF

July 21
Today is “National Junk Food Day.”  What is your favorite type of junk food?  How often are you allowed to eat this food? PDF

July 22
July 22nd is the “Pied Piper of Hamelin Day.”  The Brothers Grimm documented this legend.  Using resources in the classroom, learn five (5) facts about the Pied Piper and summarize them in your own words.  PDF

July 23
Robert Quackenbush, the author and illustrator of nearly two hundred books for young readers, was born on this day.  When you grow up, would you like to be an author and/or illustrator?  Why or why not? PDF

July 24
Today is “Amelia Earhart Day” in honor of her birthday in 1897.  Earhart was the first person to fly solo across the Pacific Ocean.  Using resources in the classroom, learn five (5) facts about the Amelia Earhart and summarize them in your own words. PDF

July 25
July is “National Recreation Month.”  After you have looked up the word “recreation” in the dictionary, describe your favorite recreational activity. PDF

July 26
On this day, the Sesame Street character Bert was introduced.  If you could create a new character for Sesame Street, what type of character would it be?  What would you name the character?  What type of physical and emotional characteristics would they have? PDF

On July 26, 1990, President George H.W. Bush signed the Americans with Disabilities Act. This Act makes discrimination against people with disabilities illegal. Why do you think it’s so important that everyone has equal rights and opportunities? PDF

July 27
On July 27, 1913, Scott Corbett was born.  Corbett is well known for the various series of children’s books that he wrote.  Do you have a favorite series of books that you enjoy reading?  Do you think it’s important for people to read the books in a series in the order they were written?  Why or why not? PDF

July 28
On this day the first fingerprint was taken.  Ed Emberley is known for his fingerprint drawings.  Think of several characters you could include in a story and write the story.  Using ink and your fingers, create your characters. PDF

July 29
Today is “National Lasagna Day.”  Write a paragraph explaining how to make a dish of lasagna. PDF

July 30
July 30th is “National Cheesecake Day.”  A local restaurant has asked you to create a new flavor of cheesecake for their children’s menu.  What flavor would you create?   PDF

July 31
On this day in 1790, the first U.S. Patent was issued to Samuel Hopkins.   A patent “provides exclusive rights to make, use, import, sell and offer for sale the invention for up to 20 years.” Why do you think having patents is important?  PDF

DISCLAIMER: We have provided “suggested” grade levels for some of our writing daily prompts. These suggestions are made based on the content of the prompt, the interest level of the topic, or the level of background knowledge needed to have the most success possible with the prompt. Please remember that these are suggestions only and each prompt can be modified as needed by you, the teacher. Don’t hesitate to get creative and rework the prompt to best fit the age/needs of your students!

Return to the Writing Prompts index.

SAFE: All subscriptions can be paid via Paypal or Stripe, so your sensitive banking information is never seen nor stored by our website.

We are currently upgrading our servers. We aren't expecting to have too many issues. If you notice anything not acting correctly, especially if you are a regular user, please email us and give as much detail as possible (where, what, maybe when): [email protected]