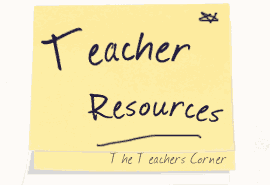 Password
Here is a great game to play with your class during the days surrounding testing.


I was talking with a friend the other day and we were sharing games that were good to do during testing (we started last week).
Needed: nothing but a blackboard and chalk
1. Divide the class into two teams.
2. One member of each team comes to the front of the class, stands against the blackboard and faces the class. Above their heads, write a single word.
3. The students standing at the front of the class take turns calling on their own teammates to give them a one word clue.
4. After the clue is given, the person at the front gets one chance to guess the word. If the word isn't guessed, it's the other team's turn. Encourage students to call on teammates who haven't had a turn. Clues given must not contain any part of the word that is written on the chalkboard, nor may it be a tense of the verb if a verb is used.
5. Points are earned by a team if the word is guessed, or if a member of the other team says the word accidently, or if part of the word is used by the other team. If a team goes twice in a row (because they get so excited!), it is the other team's turn to go twice. Barb M.
Submitted by: Barbara D. Martin & Mardi Plancich

Test Review
An idea for a review that will appeal to all the children and allow them all a fair chance to participate.


When I had my class review for a test I knew I had to come up with something that would appeal to all the children and allow them all a fair chance to participate. I decided to make it somewhat competitive this way it will keep their interest.The first place team would receive 5 extra points on their test, 3nd place would get 3 points and 3rd place would get one extra point. I called this Garbage Can Review.

I would divide the class into 3 teams. With each team having a captain that I would choose. Each student would get a chance to be the speaker, the actual person who would give their team's answer. 3 Students from each team would each get a chance to shoot a paper ball into the garbage can from a designated distance away.(this would be rotating) If all 3 students made their shot the question would be worth 5 points, 2 shots in worth 3 points and 1 shot in would be worth 2 points. If no shots were made it the question would only be worth one. The team gets to discuss the answer as a group while the other groups also discuss their possible answer. If the question is answered right then they receive their points and the next team goes. If they are wrong the next team has a chance to answer for those same points.

I know this may sounds  a little unconventional but this allowed all students to participate somehow. If they were not able to help with the answer they were at least able to help their team score points.
Submitted by: Lynda Day - Astoria, New York

SAFE: All subscriptions can be paid via Paypal or Stripe, so your sensitive banking information is never seen nor stored by our website.